"Sherpa" is a documentary that follows a 2014 Everest expedition entirely from the Sherpas' point of view.

“We set out to make a film of the 2014 Everest climbing season, from the Sherpas’ point of view, to observe up-close, how and why the relationship between foreign climbers and Sherpas has shifted since the euphoria of the first Everest summit climb in1953. But a brutal avalanche changed all that: with 16 Sherpas dead, the mood soured with grief and anger spilling over. The events of the week that followed were the most transforming on the mountain, and will affect the Sherpa/climbers' dynamic forever.”

All profits from this evening will go to support the Himalayan Development Foundation Australia and their rebuilding 10 Villages Project. 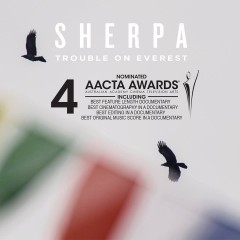