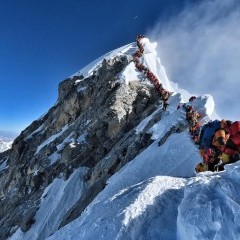 Chaotic scenes on top of Everest prompt rethink of Nepal

This week's arresting image of climbers queuing to summit Mount Everest is one of insanity. And in the context of a Nepal still devastated by the 2015 earthquake, we might ask whether the West's fascination with Nepal should be realigned.

In recent days, along with news of the deaths of ten climbers on Everest a shocking image has emerged: a human traffic jam, hundreds strong, along the final ridge to the summit. 'I can't believe what I saw', chronicled Canadian documentary maker and mountaineer Elia Saikaly, who made it to the top only to witness 'Death. Carnage. Chaos' on the way down. The image of the crowded peak that has circled the world in recent days says many things. It speaks of the greatest of human ambitions, and also the folly of such ambition. It speaks of commercial insanity and the commodification of what was once an almost impossible frontier of human achievement.

And it speaks of the complex relationship between foreign visitors and Nepal, a country devastated only four years ago by this very mountain range and the powers it unleashed in the form of a magnitude 8.1 earthquake which killed nearly 9000 people and left a nation severely damaged. The image of Everest's peak this week shows a great concentration of human energy and fascination upon a single spot. But step back for a moment to see it against the greater picture of Nepal and something else altogether emerges. Now we see a line of human appetite and ambition that cuts through a nation in which many communities are still desperately trying to claw their way back from near total annihilation only four years ago.

For Duncan Chessell, one of Australia's most highly accomplished mountaineers and three time Everest summiter, the image is stark reminder of the way foreign attention is disproportionately focused on Everest while so many other communities go neglected. 'I have had the privilege of visiting Nepal many times' says Chessell, 'and as I went further afield it became clear that Nepal's very remote communities were utterly neglected. They were incredibly difficult to access, under-resourced by the government, and off the beaten tourist and trekking trails. They were also often overlooked by charities.'

It was the realisation that the most vulnerable people in Nepal were getting the least attention that led Chessell to establish the Himalayan Development Foundation Australia (HDFA) in 2014. HDFA first set out working in the Kangchenjunga region of eastern Nepal near the borders of Sikkim and Tibet. 'School attendance in 2013 was only 25% and those who did attend were barely in school. They were sleeping on freezing concrete slabs in dilapidated buildings. There was just so little in these communities to offer the children any kind of future.'

Chessell joined forces with HDFA co-founder Andrew Stace, an Adelaide based teacher with an International Studies background who had been involved in teacher training in Nepal. Together the two decided to take on a formidable task. 'We could see that to ensure a child received an education it was not a matter of building a new school or adding a new coat of paint, we had to work with the community to change the economic situation to allow the children’s families to afford for them to attend, improve facilities, teacher training and health; what was really needed was whole community development. We knew a number local Sherpa who wanted to step up and work for their communities to make things better and give their kids a future, but who just needed support. So we decided to find a way to make it happen."

Five years later and the community has a brand new school and boarding house. No one is sleeping on concrete anymore and attendance at school has gone from less than 25% to 100% of children in the region. The school has been so successful that people from nearby villages are clamouring to get in, so HDFA hopes to be able to replicate the success down valley in future years. 'It's hard to express how important and rewarding this work has been', says Chessell. 'I spent many years of my life reaching the greatest heights on earth, but that doesn't seem so important anymore compared to this work that we are doing for the people of remote Nepal.'

Chessell hopes this week's startling image of Everest prompts deeper thinking about Nepal. 'I just hope as people shake their heads at what is happening on Everest that some of them can see what we really need to do for Nepal: to not go there just for personal conquest but in the spirit of shared humanity. 'This is a nation in great need. We can do something to help them.'

Himalayan Development Foundation Australia now operates in three project areas, positively impacting around 10,000 people per year, focussed on community development. Your one off donation or regular giving will assist us to continue to provide a brighter future for Nepal's children. Click here to donate. Donations are tax deductible. 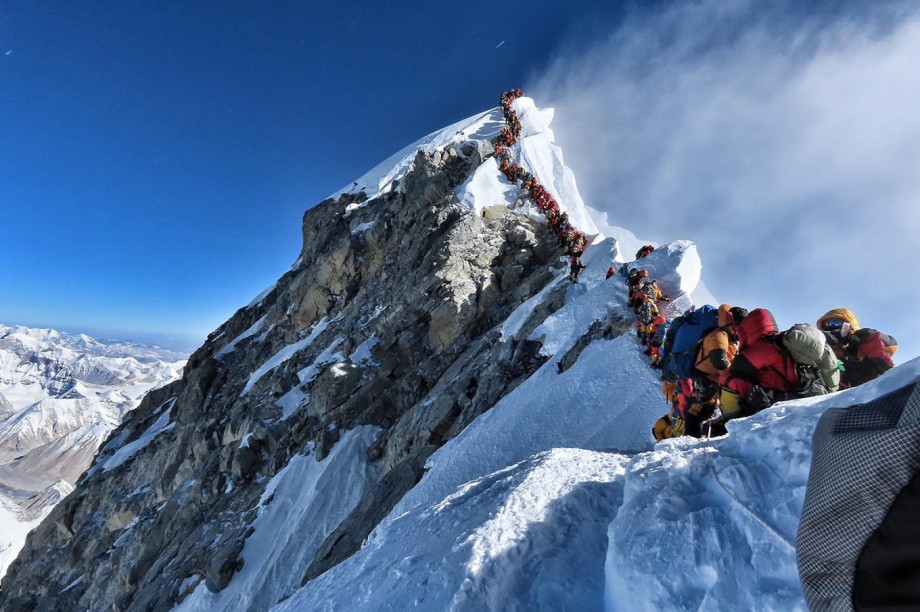